Kazenojin ("People of the Wind") is devoted to the creation, maintenance, and the distribution of knowledge about Airships and other flying machines in Second Life.

The first large airship community was begun in July 2003 by Goodwill Epoch. Members pooled together and, in association with Linden's themed sim project, purchased Gray to create the new airbase.

The initial airship port had a large base, a pin point top, and covered nearly the entire sim space. This first port was later taken down (most likely due to finacial constraints) and a second slightly smaller model was built. The second port had a significantly different architecture.

The port still stands today as a testament to the Kazenojin airship community. 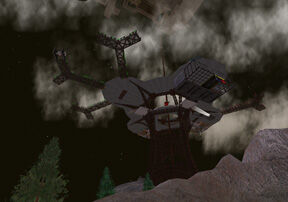