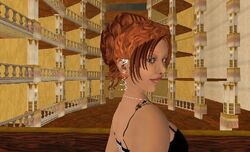 Gwyneth Llewelyn is a blogger, philosopher and activist in Second Life.

Born in RL in the same year the Internet was created, Unix was developed, and the first human being stepped on the Moon, Gwyn has been around Second Life since July 31, 2004 — and has spent too much time since then.

Also, unlike other famous and illustrious members on this Wiki, Gwyn has rather a bleak curriculum in Second Life. She is not renown for her scripting and is fond of telling everybody how her own major scripting projects were outpassed by everyone else in Second Life. Two months before SL Exchange launched, she had a working prototype — but it never opened. She had a working low-lag animation overrider well before anyone knew what that was (neither did she — it was a device sold for L$50 that "made your walks more sexy") and never managed to get rich (or known) for that. She has the most complex combination device that delivers through XML-RPC calls instead of plain and simple llGiveInventory(), because of silly permission problems introduced in SL in 1.8. Her dance bracelet is perhaps the only thing that works right (the bugs are too obscure for one to notice them).

She is no builder. Her last attempt of building a house was in September 2004. She still keeps a picture of it to remember never to do another attempt at building.

Also, she is a slow forum poster, only about 1/10th of Ulrika Zugzwang, Prokofy Neva, or Torley Linden. Half of her posts are related to the Neufreistadt project and thus of enormous interest of a population of about 60 (it's amazing how that group managed to get 6000 posts in 18 months :) ). Fortunately, with the forums now getting closed, there will be no way that anyone will get across her rantings.

She is no land baroness, content baroness, or event princess. She still is a premium user, but for no reason; all her land is rented, the 512 tier is in a group, and she only has a few micro-shops anyway. She does not belong to large groups she has founded (she joined Thinkers several months after it was created) — actually, she is only happy of not having too many groups against her (like the SCAG — Secret Conspirators Against Gwyn). So, she's barely worth an entry on this Wiki. Really.

Her blog is perhaps the only thing she can be proud about. For an estimated reader population of 650,000, it boasts around 400 unique visitors a day, and about 70,000 page hits a month (Google Analytics show one quarter of that). Not bad, considering that her own RL blog (rarely updated these days) has an estimated reader population of perhaps 20,000,000 (Portuguese speakers connected to the Internet) and has way less than one tenth of the traffic. If at all. She uses Dreamhost for her (recently updated) WordPress blog, a notoriously cheap hosting provider, because she felt ashamed of mantaining servers where all other sites put together had less than one tenth of the traffic of her own blog — there is only so much that you feel ethically right to do on your boss' server.

So... what does someone in SL that does not script, does not build, does no animations, does not engage in land sales, does not work as an escort, does not belong to any lifestyle, does not have any groups...? The answer is: networking :) Second Life is about people — something most residents tend to forget. But we have the example of Torley Linden to follow. Keeping in touch, organising people, putting them together, launching new projects — that's what Gwyn does. It's certainly not so glamorous as being on top of the world, exploiting a market niche... but it is fun nevertheless. :)

Recently, she has been accused of participating with the SL Chamber of Commerce Incubator group. She's also encouraging actively the participation in Rudy Ruml's seminars on Democratic Peace Theory held in Second Life.

Also, it does have a big advantage: you get a pretty good idea on what different people think. A scripter will see the world from inside LSL; a builder will worry about prims; a land baron will worry about group tools and how much the L$ is worth today. Gwyn, however, worries about everything.

Gwyn is a meta-resident. And a loudmouth. And mostly harmless :)

Retrieved from "https://secondlife.fandom.com/wiki/Gwyneth_Llewelyn?oldid=37958"
Community content is available under CC-BY-SA unless otherwise noted.