The God menu is a Second Life UI element and a special menu (like the debug menu) that usually only appears for Lindens but has since been hacked to allow anyone to view it and enable some client-side only options. 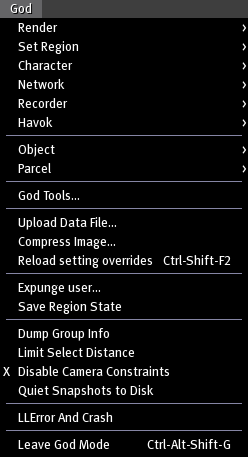 Retrieved from "https://secondlife.fandom.com/wiki/God_menu?oldid=32531"
Community content is available under CC-BY-SA unless otherwise noted.