Edit this page
watch 01:36
We're Getting Mutants in the MCU - The Loop
Do you like this video?
Play Sound 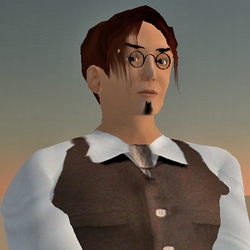 Eggy Lippmann joined Second Life in April 2003 after reading about its Public Beta opening on Slashdot and never looked back.

Together with Oz Spade and Jarod Godel, he co-founded this wiki to document and comment upon the history of Second Life.

Eggy has devoted most of his Second Life to working on projects, rather than creating consumer-oriented products, and has indeed never had a store.

Some screenshots of projects Eggy's been involved with and miscellaneous items he made.

"Barking up the right tree"