The topic of this page has a wiki of its own: Second Life Aviation Wiki.

Abbotts Aerodrome was founded in January 2004 by Apotheus Silverman and Cubey Terra. It originally consisted of separate plots of land consisting of about 24,000 sqare meters. Over the years that followed, the Aerodrome expanded to occupy most of the available land in Abbotts. The officers of Abbotts Aerodrome are: Jillian Callahan, Reitsuki Kojima, Chage McCoy, Arrekusu Muromachi, Apotheus Silverman, and Cubey Terra. Other staff members of the Aerodrome include Liaisons Devon Cameron, Unabrow Chabrow, Millie Thompson, and TheManKnownAsDaveP Crosley who help keep the airport safe from the usual griefers of Second Life and help customers find their way around the large airport.

Abbotts Aerodrome was Apotheus' and Cubey's second attempt to build an airport. The first was Zoe Airfield (November 2003 to January 2003). The original concept behind the Aerodrome was a multi-level, art deco, futuristic airport that floats over the ruins of a ficitious abandoned airfield. If you visit the ground level, you can see a dilapidated, hangar and tower, and a couple of wrecked biplanes.

Automated flights leave the Aerodrome runway several times per hour and fly on regular routes all over the mainland. The AI planes used on the route consist of a light civilian monoplane, a L-18 Lodestar, and a Boeing 737.

Unlike most of the historic builds in Second Life, Abbotts Aerodrome went through three distinct building phases between the 2004 opening date to the present.

On 2nd August 2011, Cubey Terra announced that Abbotts Aerodrome is closingon 1st September 2011. The sim was purchsaed by Cheshyr Pontchartrain of Novatech on 29 August 2011. It has since changed ownership, but is still open to the public.

The original structure consisted of several floating levels that connected to a central elevator shaft:

By about March 2004, Reitsuki Kojima joined the Aerodrome, moving into hangar 1. Several additions were made to the Aerodrome in the following months, including an office level on Level 5, at which time Chage McCoy joined the group.

In September 2004, Cubey "went mental" and replaced the box-shaped hangars with a style that resembled a '50s diner. 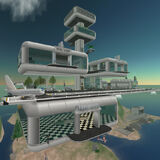 The Aerodrome received another major change during the Spring, Summer, and Autumn of 2005:

In September 2005, Cubey Terra stepped down from management of the Aerodrome. Arrekusu Muromachi stepped in to help manage the Aerodrome and run events, followed by renowned helicopter-maker Jillian Callahan, creator of the Callahan Combat Control(CCC) system. Only one month later, to everyone's collective dismay, Cubey returned. Both Jillian and Arrekusu continued in their roles as Aerodrome officers.

In March 2006, Cubey "went mental" again, as minor renovations led to the complete destruction and rebuild of Abbotts Aerodrome. The new build consisted of several compact buildings that clung to the hillside.

Cubey rebuilt the runway and tarmac at ground level, with a large hangar and a new passenger terminal. The central building, which contained offices, Apotheus Silverman's shop, and Terrabucks Coffee, was on the hill and fronted by a plaza and a fountain made from an old Linden telehub.

On the east side, on the top of the ridge, a heliport included several landing pads and Jillian Callahan's shop.

In October of 2006, the Aerodrome went through another rebuild phase. The current runway from the March 2006 rebuild was left in place, however the individual shops for each respected Aerodrome Commander as well as the central HUB with the offices, Terrabucks, and the ground level Terminal were eliminated in favor of a gigantic tower design.

In addition to the changes. Cubey Terra has demolished his shop to merge his wears with the rest of the Aerodrome.